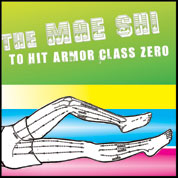 So, right off the bat, I should state that I know the members of this band, so I may be a little biased. But damned if these guys don't rock. This album's short - 5 songs, one of which consists mostly of eardrum-rending squealing courtesy of the lead singer's Buchla synthesizer - but right now this is on my top 5 for the year list (and, yes, I know it's only March, but it's been a good year, so it's a competitive list).

Obviously, I'm the right target for this - any band that falls somewhere inbetween JSBX and Nation of Ulysses is going to go over very well with me. So, wanting to make sure I wasn't completely alone here, I passed the CD around to a handful of coworkers with generally good taste. Most of them compared the band to one of the various heavily written-up garage rock bands, which probably bodes well for the Mae-Shi's future.

Sadly, the album isn't really getting a lot of distribution, since it's being burned and printed by members of the band. However, if you're curious, you can listen to it absolutely free at The Official Mae Shi Website. I recommend "You Can't Do That With an Axe" which is probably the best spazz-rock song I've heard in many years. If you live in the Los Angeles area, I'd also recommend seeing them live, though earplugs might be recommended (given the afore-mentioned eardrum-rending capabilities of the Buchla).